Or you can order a physical CD.

You can purchase the song videos here!

Wayne Tester had reached a level of success as a songwriter that others can only dream about. He wrote the theme song for the Sydney Olympics which was heard by 3.7 billion people at one time and has won many top awards. But when he went through Freedom In Christ, he realized he had issues with pride and performance and had made God’s gifts an idol. So he threw all his awards away (literally!) and now bases his identity solely on who he is in Christ. Wayne and his wife Esther wrote Worship In Spirit And Truth, an album of 16 powerful new songs inspired by Freedom In Christ, to go along with the course. Apart from being great music, the songs will help you take the truths taught in Freedom In Christ from head to heart.

Nicole C. Mullen is a singer-songwriter who has been inducted into the Christian Music Hall of Fame. She is the only African-American artist to win a Dove Award for both Song of the Year, and Songwriter of the Year. In this video she shares the story of how her son was hugely helped by Freedom In Christ’s teaching:

Samples of songs are below. You can also buy lyric videos to use in worship in your church.

The album was produced in Nashville by Testricity Music Group and also features many other artists, including Nicole C. Mullen and The Katinas. 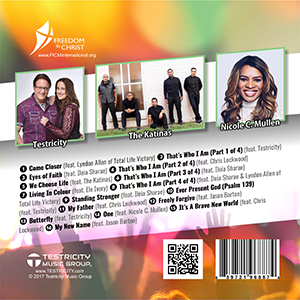 Sample 30-second clips from each song are available below together with the session from Freedom In Christ they go with:

Or you can order a physical CD.

You can purchase the song videos here!